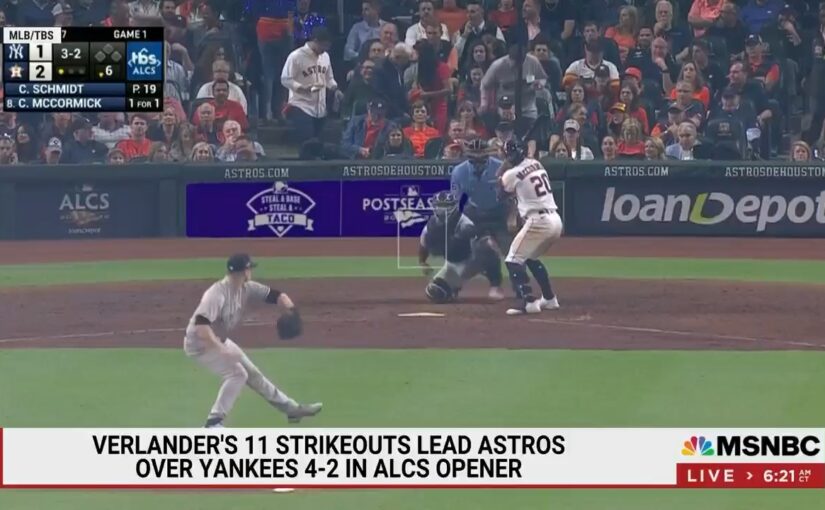 “My dream is that the Yankees beat the Astros, and then the Phillies beat the Yankees in the World Series, and that’s quite a World Series. Philadelphia versus New York, a subway series so to speak…The series will probably end on Thanksgiving eve in the snow, but that’s my dream,” says Morning Joe veteran columnist Mike Barnicle during this conversation with Joe Scarborough and Claire McCaskill about the Major League Baseball playoffs after the Houston Astros defeated the New York Yankees in game one of the American League Championship Series and the San Diego Padres evened up the National League Championship Series with a victory over the Philadelphia Phillies in game two. 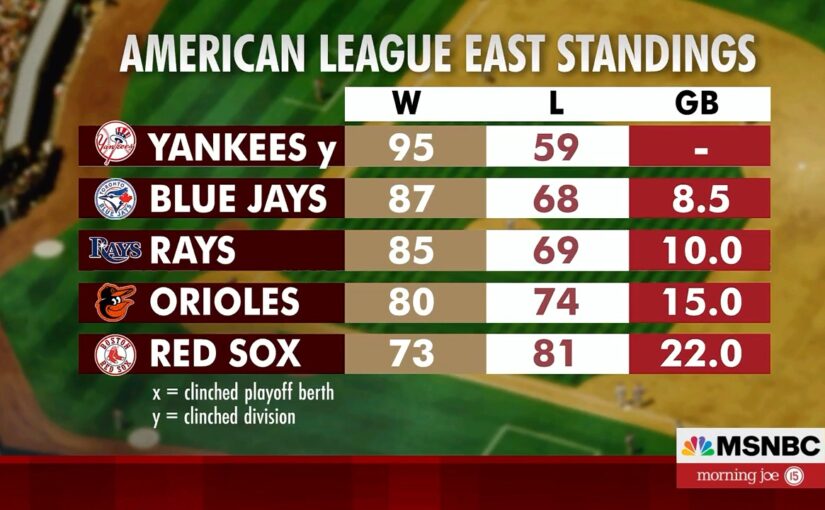 Morning Joe’s Joe Scarborough, Willie Geist and Mike Barnicle talk Major League Baseball, with the playoffs less than ten games away, including the Boston Red Sox’s disappointing season as the team will finish in last place in the American League East. “Outside of my family, the Red Sox are the most important component of my life, and I have to tell you that this has been the most bitter, the most disappointing season I’ve experienced in a long, long time. There is no excuse for what’s happened.” You can watch the segment here. 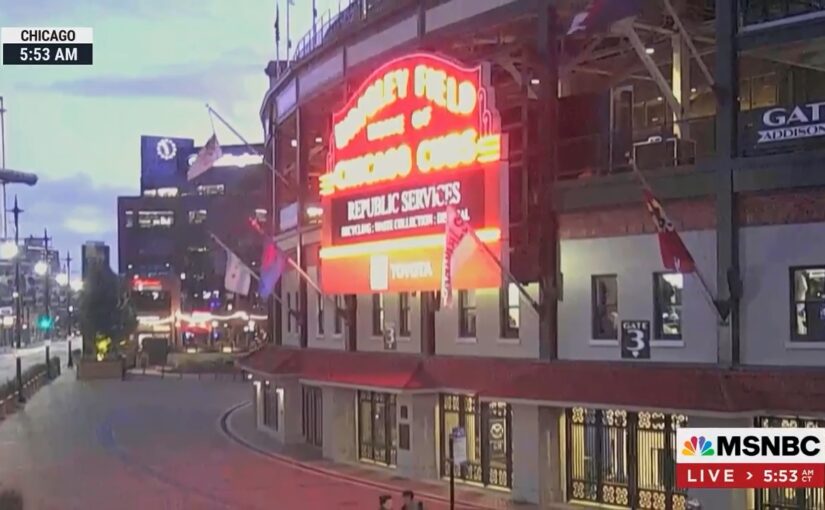 Morning Joe’s Willie Geist, Claire McCaskill and Mike Barnicle talk baseball: recent games, players and MLB news. “The big highlight for me as a baseball fan…was watching the Mets game, and they had a young kid broadcasting…maybe 11 or 12 years of age, and he did a half inning broadcast with the crew – Ron Darling, Keith Hernandez and Gary Cohen – and it was such a joy to watch….There’s a magic to baseball in watching it, listening to it; it’s relaxing; it’s calming, and it’s a constant story that America tells itself through watching a baseball game,” says Barnicle about the New York Mets having had kidcaster Eddie Kraus join their broadcast booth to do play-by-play during a game. Watch the segment here. 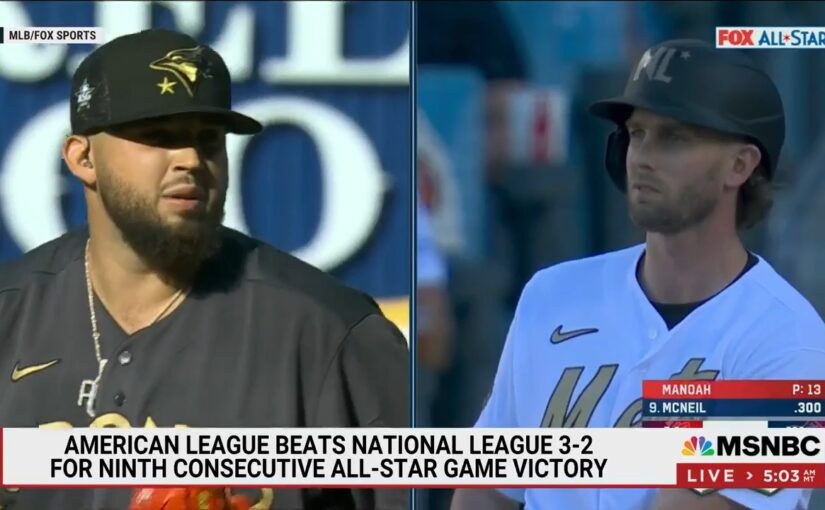 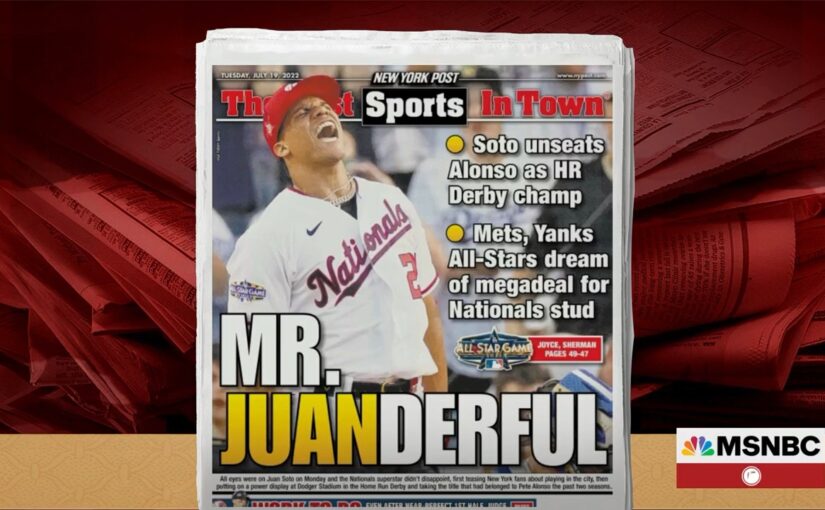 Tune in for this Morning Joe conversation about baseball—the players, their contracts, and their ages—with Joe Scarborough, Eugene Robinson, Claire McCaskill, Jonathan Lemire and Mike Barnicle. 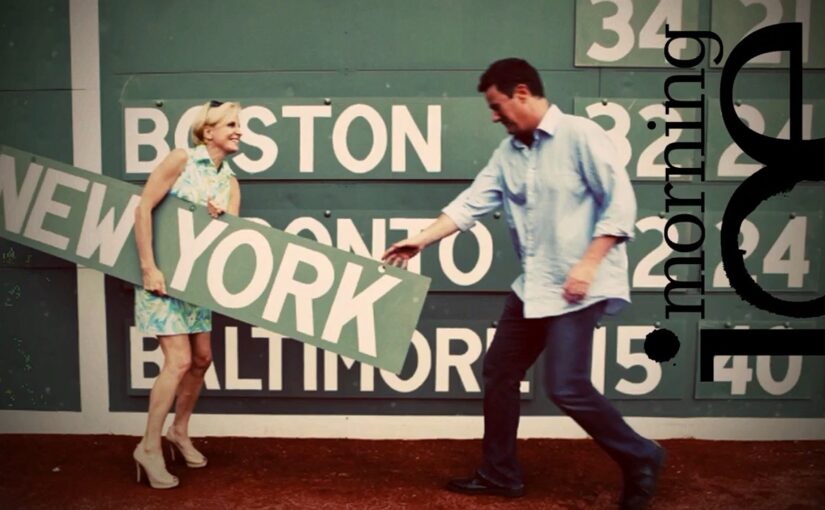 Tune in for this Morning Joe conversation with Joe Scarborough, Willie Geist, Mika Brzezinski, Jonathan Lemire and Mike Barnicle as they contrast two recent occurrences in Major League Baseball: New York Yankees outfielder Aaron Judge having an emotional meeting with the 9-year-old fan whose story went viral after he had his wish come true when a Toronto Blue Jays fan gifted him with a Aaron Judge home run ball he caught and Arizona Diamondbacks pitcher Madison Bumgarner being ejected after the first inning of his start against the Miami Marlins after a confrontation with first-base umpire Dan Bellin. “I prefer to focus on the New York Yankees and Aaron Judge and that little boy because, as Joe just indicated, that capsulizes the romance of baseball. You pass it on to your sons, your daughters, and they carry it through. That was just a wonderful moment, wonderful moment,” says Barnicle about Judge’s meeting with the young fan. Watch the segment here. 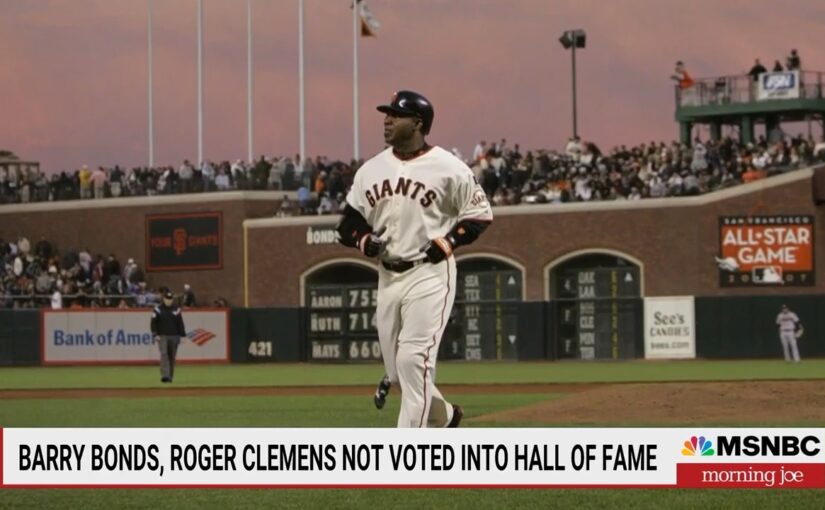 Tune in for this Morning Joe conversation with Joe Scarborough, Willie Geist and Mike Barnicle as they slam the election standards for the National Baseball Hall of Fame that have excluded certain all-time great Major League Baseball players due to their checkered histories, following the homerun king Barry Bonds and legendary pitcher Roger Clemens being denied entry during their last year of eligibility. “Let’s stop being ridiculous. Admit what happened. Explain what happened and put them in the Hall of Fame where they belong,” says Barnicle about all-time great baseball players who are being denied entry to the National Baseball Hall of Fame. Join the conversation here. 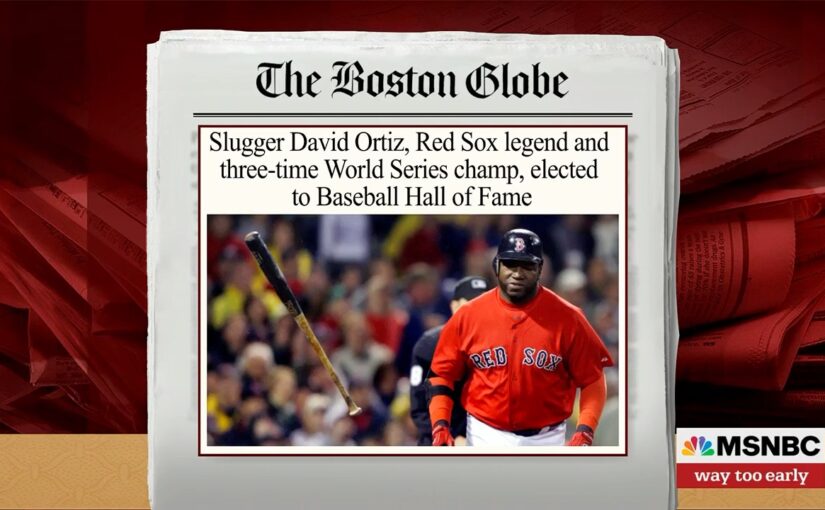 Way Too Early’s Jonathan Lemire and veteran columnist Mike Barnicle pay tribute to Boston Red Sox legend David Ortiz, who was just inducted into the Baseball Hall of Fame his first time on the ballot, while lamenting that homerun king Barry Bonds and all-time great pitcher Roger Clemens were denied entry during their final year of eligibility. “Bonds and Clemens—they both deserve to be in the Hall of Fame, and they should be in the Hall of Fame,” says Barnicle. “And there should be an asterisk and an explanation of why it took them so long to attain Hall of Fame status on their plaque. You can’t ignore the fact that two of the greatest players in the history of Major League Baseball are now off the ballot after ten years.” Watch more of the conversation here. 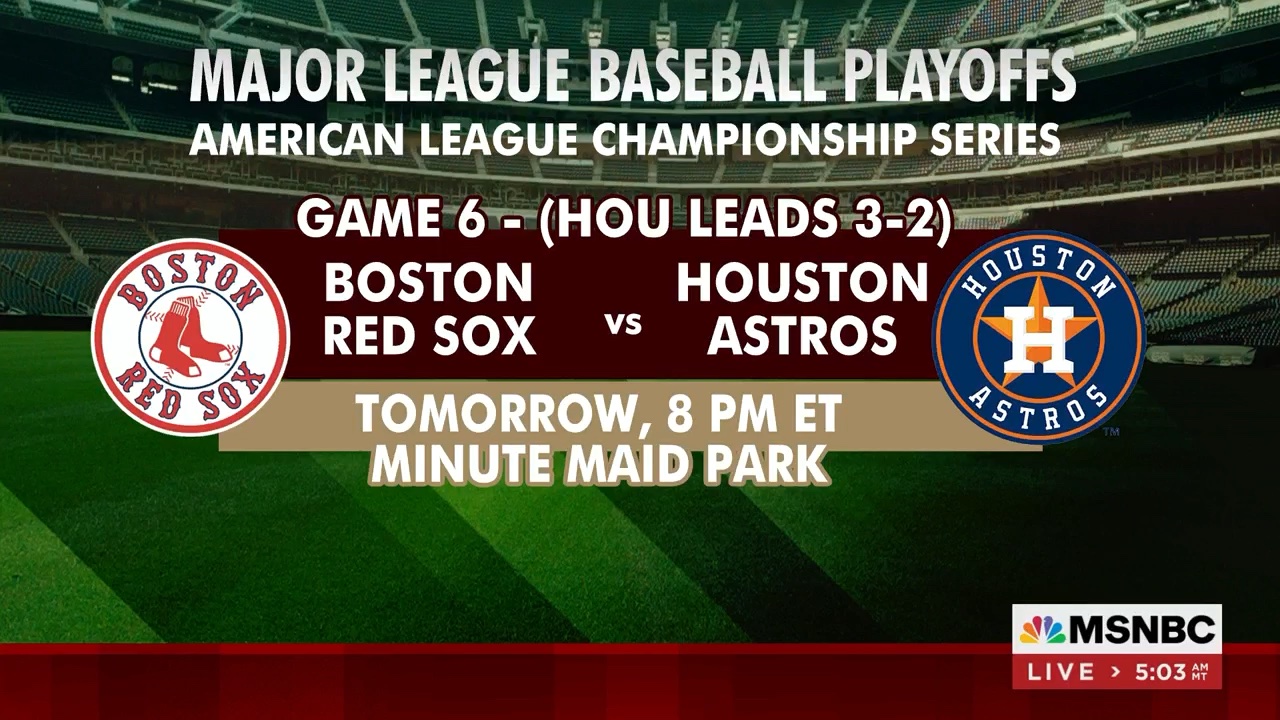 Tune in for this Morning Joe conversation between Joe Scarborough and Mike Barnicle as they discuss their beloved Boston Red Sox with the team facing elimination after a game 5 loss to the Houston Astros in the American League Championship Series. “It’s been a wonderful year. We’ve been blessed with many, many victories that we didn’t expect, and we’re still here….You win some, you lose some, but you’ve got to dress for all of them. And we’ll be dressed tomorrow night in Houston, ready to go,” says Barnicle. 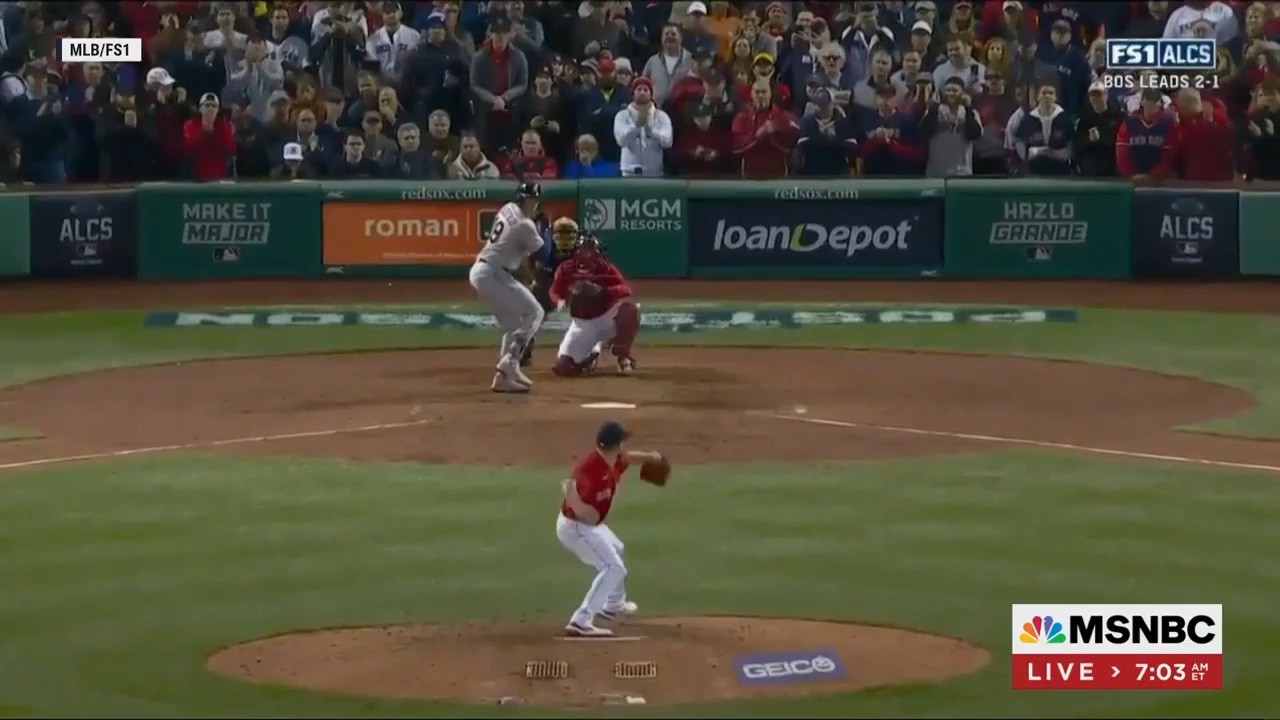 Morning Joe’s Joe Scarborough and Mike Barnicle discuss the 2021 Major League Baseball playoffs, including home plate umpire Laz Diaz missing a strike-three call with two outs in a tie game during the ninth inning that ultimately led to the Houston Astros defeating the Boston Red Sox in Game 4 of the American League Championship Series. “You can’t blame a single call for a loss in a game. You know that. But it was a pretty brutal night in the ninth inning at Fenway Park,” says Barnicle about the blown strike-three call by Diaz. Watch the rest of the conversation here.